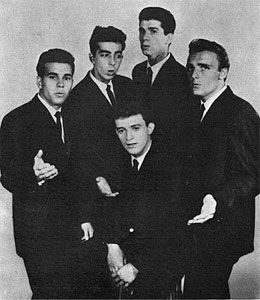 Guy Villari, Sal Cuomo, Ernie Maresca, and Chuck Fassert formed in the Bronx, NY, in 1958 as the Montereys. Signing with Seville Records, they cut two Maresca songs that went unreleased, and soon Donnie Jacobucci replaced a disappointed Maresca. They recorded their demonstration records at the Regents Sound Studios, prompting a name change to the Regents, but their first release didn't happen until 1961, three years after they started.
"Barbara Ann" was recorded in 1958, but more than 50 recording companies said "no," causing them to disband before 1959 rolled around. Jacobucci's younger brother Eddie revived the Regents by accident. His group, the Consorts, lacked original songs for an audition so they cut a version of "Barbara Ann" from an old demo Eddie found around the house. When the owner of Cousins Records heard the song, he decided to put it out, not by the Consorts, but by the Regents. With Eddie replacing Guy, the original group reunited, and Cousins released "Barbara Ann" in March of 1961. The stuttering doo wop became a number one record in New York; the demand was overwhelming and Cousins leased it to Roulette/Gee for worldwide distribution and saw it soared to number 13 pop and number seven R&B.
A second single, "Runaround," charted at number 28 pop and number 30 R&B; a third single, "Liar," didn't chart, and neither did a fourth, "Oh Baby." They disbanded but emerged in 1964 as the Runarounds, waxing and releasing five singles on as many labels. the Runarounds were Villari, Fassert, Ronnie Lapinsky, and Sal Corrente; their first single, "Unbelievable," on Nat King Cole's short-lived KC label in 1963 didn't sell nor did their last, "You Lied," on MGM in 1967. Again they separated but reunited as the Regents in 1973 to play the oldie circuit. A copy of "Barbara Ann" on the Cousin label fetches around 1,200 dollars; the same recording on Gee sells for 25 dollars or less.