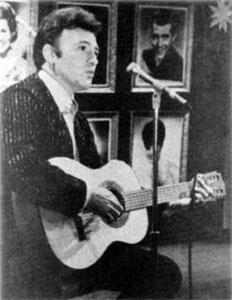 US Country singer born December 25, 1930 at Yeadiss (Kentucky). Always hovering on the fringe of the country music establishment, steel-mill worker turned songwriter Hugh Lewis did manage to write some chart topping singles during the mid to late ‘60s. Quitting his job as a laborer, Lewis moved to Nashville in 1963 at age 31 after years of performing on the side in his native Kentucky. Not long after moving, he placed "BJ the DJ" with singer Stonewall Jackson, taking the novelty song to number one in 1964. Versions by Carl Smith and Kitty Wells followed, and before long Lewis' often tongue-in-cheek songs were being recorded by the Nashville establishment with some regularity. Mac Wiseman had a hit with the down-and-out sobber "Heads You Win, Tails I Lose," and George Morgan covered "One Rose" with some success. Though a recording contract with Kapp records followed, Lewis never had much of a performing career of his own and was better suited to let others record his material.
Hugh X. Lewis passed away on December 29, 2020.