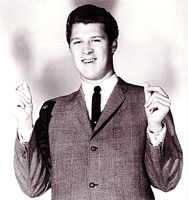 Singer Donnie Brooks remains best known for the 1960 pop smash "Mission Bell," although he is also revered in rockabilly fan circles for the cult classic "Bertha Lou," recorded under the name Johnny Faire. Born John Dee Abohosh in Dallas on February 6, 1936, he was later adopted by his stepfather and given the new surname Fairecloth. While growing up in southern California, he studied under the same Vocals coach who previously instructed Eddie Fisher, and in high school made his professional debut on a classical music showcase broadcast by Ventura-based station KBCC. After graduating from high school, Fairecloth earned his living singing at local clubs, fairs, and weddings, embracing rock & roll and in 1957 signing to local indie Fable Records to cut his debut single, "You Gotta Walk the Line," credited to Johnny Faire.
While cutting demos for the Surf label, he learned that contractual obligations were forcing friend and mentor Dorsey Burnette to abandon a completed track dubbed "Bertha Lou." Surf agreed to erase Burnette's Vocals and insert Faire's performance instead, and while the resulting 1958 single earned scant attention on its original release, it is now revered as a lost classic of the rockabilly era. From there Faire adopted the alias Johnny Jordan long enough to record "Sweet, Sweet, Sweet" for the Jolt label, followed by a stint at Era, where he cut the rockabilly gem "Hollywood Party" under the tongue-in-cheek name Dick Bush. The record went nowhere, but Era owners Herb Newman and Lew Bidell were sufficiently impressed to keep the singer on the payroll — however, they insisted on yet another name change, this time to the wry Donnie Brooks. The first Donnie Brooks single, the melancholy ballad "White Orchid," proved his biggest hit to date, selling about 50,000 copies on the West Coast and topping the Australian pop charts. The follow-up, the Dorsey and Johnny Burnette castoff "Mission Bell," did far better, vaulting Brooks into the Billboard Top Ten and earning him his first gold record. A second Top 40 hit, "Doll House," followed at the end of 1960, and early the following year Brooks scored his final Hot 100 entry, "Memphis." Subsequent singles including "Wishbone," "Boomerang," and "My Favorite Kind of Face" failed to reignite Brooks' career, and following the late-1962 release of "Cries My Heart," the label terminated his contract. Brooks spent the following year off the radar, but resurfaced in early 1964 on Reprise with "Gone." That same year, he appeared in the feature film Get Yourself a College Girl, but Beatlemania effectively spelled the end of his recording career and after one final Reprise effort, "Pickin' Up the Pieces," his tenure with the label came with a halt.
Brooks nevertheless maintained a busy live schedule, opening for the likes of Roy Orbison, Connie Francis, and the Dave Clark Five — he even opened for Frank Sinatra and Sammy Davis, Jr. in Lake Tahoe. In 1971, Brooks appeared as Jesus Christ in the rock opera Truth of Truths, later embracing Christianity. In the years to follow he produced and promoted oldies revival showcases, and continued touring until a serious car accident forced him into retirement in 2003. Brooks died of congestive heart failure on February 23, 2007; he was 71 years old.