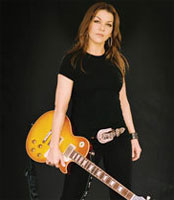 In late May 2004, Gretchen Wilson's debut single, "Redneck Woman," became the first by a solo female singer to top the Billboard country singles chart in over two years; it also reached number one faster than any single in the previous decade. At the same time, her debut album, Here for the Party, entered the country album chart at number one and the pop album chart at number two with sales of 227,000 copies, the biggest opening week for a new country artist on record. Given the overtly country style of her music at a time when much country had been leaning toward pop, Wilson was immediately hailed as the latest in a long line of country artists leading the music back to its roots.
Her own roots went back to the tiny town of Pocahontas, IL (36 miles east of St. Louis, MO), where she began singing as a child. Her mother was 16 when she was born on June 26, 1973; her father left when she was two. She grew up poor, living in a succession of trailer parks. She went to school only through the eighth grade, and at 14 was working as a cook and bartender in the same club where her mother worked. By the age of 20, she was singing in two different bands in the area. She moved to Nashville in 1996 and tended bar while singing on demos and in clubs for the next seven years. During this period, she became part of an informal group of singers and songwriters known as the Muzik Mafia who met once a week to try out new material. She and John Rich, another member of the group (and a former member of Lonestar), wrote "Redneck Woman," an autobiographical song in which she unabashedly celebrated her redneck, white-trash background.
In 2003, she auditioned for and was signed by Epic Records. "Redneck Woman" was released as a single in the late winter of 2004 and immediately began its march up the charts. Here for the Party, originally scheduled for release in July, was moved up to May 11 because of the quick success of the single. As it, too, became a hit, Wilson agreed to opening spots on tours with Brooks & Dunn and Montgomery Gentry in the summer of 2004. By this time "Redneck Woman" had become a classic country anthem and Wilson was a superstar. She coped with the instant celebrity, and continued to work as a musician, finding time to write a book, also called Redneck Woman, which hit shops in 2005, the same year her follow-up album, All Jacked Up, appeared. One of the Boys, a deeply personal album, and the first album in which Wilson had a hand in writing most of the songs, was released in 2007.  Her parting album for Sony was a best-of in 2009. "Work Hard, Play Harder," her first independently released single on her own Redneck Records imprint, arrived in late 2009, followed by the I Got Your Country Right Here album in 2010. She released the impressive and diverse Right on Time on Redneck Records in 2013, along with an album of covers of '70s rock songs, Under the Covers, and the holiday album Christmas in My Heart. After a four-year hiatus, much of which she spent raising her family, Wilson returned with Ready to Get Rowdy in the summer of 2017.