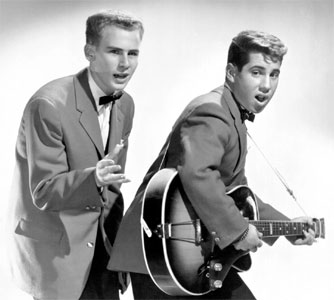 Tom & Jerry were actually the duo of Paul Simon & Art Garfunkel, who worked under that name when they began recording in the late '50s. It's a period that they downplay when discussing their careers, preferring to pick up the story after they had begun performing folk and folk-rock in the mid-'60s. Long before that, though, the pair were high-school buddies, and when they were both 16, they made their recording debut on Big (which was anything but) with "Hey Schoolgirl." The peppy pop/rocker, performed in the style of the Everly Brothers, was actually a substantial hit, reaching number 49 on the charts.
Tom & Jerry (i.e. Paul and Art) recorded a few more singles for Big without any success, all in a lightweight teen rock style. Most often they sounded like a juvenile Everly Brothers, but echoes of Elvis, teen idols, and doo-wop could also be heard. The material (most of which was original) wasn't that strong, but echoes of the future could be clearly heard in their close harmonies and occasional hastily strummed acoustic guitars. The pair were understandably angry when Pickwick Records released an album of Tom & Jerry recordings as a Simon & Garfunkel LP in the mid-'60s, shortly after "Sounds of Silence" had reinvented the duo as folk-rock stars. The recordings aren't remotely comparable to the Simon & Garfunkel classics, but they certainly hold historical interest, and a few of the cuts really aren't bad, in a catchy, innocuous late-'50s way. The tracks have also surfaced on some obscure (and possibly unauthorized) reissues.