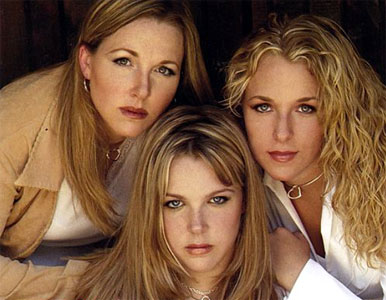 Fort Worth, Texas trio 3 of Hearts consists of Blaire Stroud, Katie McNeill, and Deserea Wasdin. After singing together for the first time at a funeral, a 3 of Hearts demo tape found its way to independent record promoter Peter Svendsen via McNeill's mother, a Fed-Ex driver. When Svendsen asked his daughter to sift through the pile of unsolicited material, she handed him the 3 of Hearts demo. It wasn't long after that 3 of Hearts had offers from four Nashville record labels, including RCA, their current label. The trio's self-titled debut album was released in July 2001 with famed Nashville producer Byron Gallimore at the helm. 3 of Hearts also embarked on the Seventeen Magazine Prom Prep 2001 Tour, stopping at several malls nationwide to showcase prom and after-prom trends while getting the opportunity to sing several songs from the album. Gillette also signed the girls for a major product campaign. (All of this and the group was barely out of high school.) A retooled Three of Hearts trio released the album Breaking All the Rules independently in March of 2005.