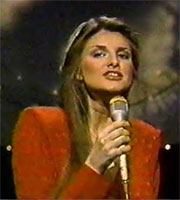 Growing up in Kokomo, IN, Sylvia moved to Nashville around Christmas of 1975 with a definite game plan: get a job as a secretary, get to know influential people in town, and build a career as a recording artist. The plan worked. She picked up a job as the receptionist for Pi-Gem Music, headed by record producer Tom Collins. She started singing on demo sessions, and Collins helped her secure a recording contract with RCA.
Since she'd never performed live before, Sylvia ended up learning to do concerts at the same time she was making hit records. With an engaging voice, a bubbly personality, and a beautiful appearance, Sylvia was practically a marketing dream, and Collins built her sound around catchy melodies and strong backbeats. Songs like "Drifter" (number one, 1981), "The Matador" (1981), "Nobody" (number one, 1982), and "Like Nothing Ever Happened" (1982) became big hits; "Nobody" even crossed over into the pop Top 40. The material was often lyrically shallow, however, and Sylvia grew increasingly frustrated. She left Collins and recorded a pair of albums with record producer Brent Maher. The second was never released. Sylvia, instead, was dropped by RCA in 1987.
She used the opportunity for personal growth (she toured almost constantly during the height of her career and was emotionally drained) and to develop as a songwriter. In 1992, she re-emerged as a touring artist and pursued a recording deal with self-penned material that was inner-directed and uplifting.