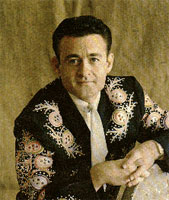 Wynn Stewart was one of the leading figures of West Coast country music, developing in the early '50s the style that would later become known as the Bakersfield sound. Along with Tommy Collins and Buck Owens, Stewart stripped down the sound of honky tonk, taking away the steel guitars and relying on electric instruments, a driving beat, and loud, energetic performances. For most of the late '50s and early '60s, Stewart released a series of independent singles that performed respectably yet failed to break him into the mainstream. By the end of the '60s, he had modified his sound slightly, bringing himself closer to country-pop territory. The shift in style was successful, resulting in his lone number one hit single, "It's Such a Pretty World Today," but Stewart wasn't able to become a genuine country star, despite his steady stream of records during the '70s and '80s. At the time of his sudden death in 1985, he was preparing for another comeback, which may have resulted in some long-overdue critical and popular acclaim. Even though he never received those accolades while he was alive, his early singles like "Wishful Thinking" and "Big, Big Love" clearly inspired contemporaries like Owens and Merle Haggard, as well as '80s neo-traditionalists and alternative country musicians like Dwight Yoakam and k.d. Lang, which guarantees him a place in the history of contemporary country music.
Stewart was born in Morrisville, MO, and spent most of his childhood moving around the country with his sharecropping family. Following World War II, he spent a year working for KWTO in Springfield, MO, before moving to California in 1948 with his family. Originally, Stewart wanted to become a professional baseball player, but he suffered from a hand disease and was too short to play ball professionally, so he concentrated on a musical career. While he was still in high school, he formed a band and began playing clubs around California. Eventually, he met steel guitarist Ralph Mooney, who joined Stewart's band; rounding out the group's lineup were guitarist Roy Nichols and bassist Bobby Austin. In 1954, Stewart signed a contract with the independent label Intro, where he released "I've Waited a Lifetime" and "Strolling." The second single drew the attention of Stewart's idol, Skeets McDonald, who had arranged an audition at Capitol Records for him. By the summer of 1956, Stewart had signed with Capitol and released his first single for the label, "Waltz of the Angels," which spent one week at number 14 on the country chart; the song was later a hit for George Jones and Margie Singleton. Subsequent singles were released on Capitol, but none of the records made any impact, and Stewart left the label.
With the help of Harlan Howard, Stewart signed with Jackpot, a subsidiary of Challenge Records, in early 1958. Occasionally employing Mooney on steel guitar, Stewart made a series of singles that explored a number of different styles, from rockabilly and pop to pure honky tonk. In late 1959, he finally had a hit with "Wishful Thinking," which climbed to number five early in 1960. Shortly after the success of "Wishful Thinking," he moved to Las Vegas, where he hosted a local television show and opened the Nashville Nevada Club. By the early '60s, Stewart's reputation, if not his sales, was considerable, and he continued to have a string of moderate hit singles, including the Jan Howard duet "Wrong Company," "Big, Big Love," and "Another Day, Another Dollar." In 1962, Haggard joined Stewart's band as a bassist, and Wynn eventually gave him "Sing a Sad Song" for his debut single.
After his Vegas ventures went bankrupt, Stewart headed back to California in 1965, re-signing with Capitol Records. Early in 1967, he had his first significant hit for the label, "It's Such a Pretty World Today," which spent two weeks at number one. Following its success, Stewart concentrated on softer, more commercially acceptable material, and the result was a string of hit singles that ran into the early '70s. By 1972, his sales were beginning to decrease, and Stewart switched record labels, signing with RCA. Over the next three years he released a number of singles, none of which cracked the Top 40. In 1975, he signed with Playboy Records, scoring a comeback single with the Top Ten "After the Storm" the following year. He stayed with Playboy for two more years, which resulted in only one other hit single: his own version of "Sing a Sad Song."
Stewart launched his own independent label, WIN, in 1978, and his first single, "Eyes Big as Dallas," scraped the bottom of the Top 40. Though the musical climate of the '70s was changing rapidly, leaving Stewart behind, he also wasn't able to achieve more success because of his developing alcoholism. Eventually, he decided to step back from performing in the early '80s, using the time away from the spotlight. During the mid-'80s, Stewart decided to launch a comeback with an extensive tour and a new album on his Pretty World record label when he died suddenly of a heart attack on the eve of the tour. Following his death, the posthumous "Wait Till I Get My Hands on You" became a minor hit.