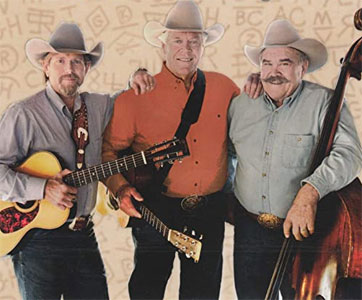 Among the most celebrated champions of Western music in the '90s and onward, the Sons of the San Joaquin fused stellar harmonies with a genuine love of the legends of the Old West and the classic cowboy sounds of the '30s and '40s.
Joe and Jack Hannah grew up in the Great Central Valley of California, in the shadow of the Sierra Nevada Mountains. They were raised surrounded by cowboy lore and the Sons of the Pioneers songs that their father would sing around the family ranch. It was these early experiences that would later shape the Sons of the San Joaquin.
In 1987, Joe's son Lon Hannah -- himself an amateur singer -- united with his father and uncle for an impromptu performance at his grandfather's birthday celebration. With that, the Sons were born. A chance appearance at the 1989 Poetry Gathering in Elko, Nevada sparked the interest of cowboy singer Michael Martin Murphey, who invited the trio to perform on his Cowboy Songs LP. The Sons signed with Warner Western (an imprint specializing in Western-themed music and poetry), and Murphey produced their 1992 debut, A Cowboy Has to Sing. The album was lauded for its effortless re-creation of the harmonies and storytelling that typified the Sons of the Pioneers' material. Songs of the Silver Screen appeared a year later; the album revived B movie Western soundtrack material that had originally been recorded by the Pioneers'. Released in 1995, From Whence Came the Cowboy was the first Sons of the San Joaquin album to feature original material, the majority of which was written by Jack Hannah.
For 1997's Gospel Trails, the Sons switched to the Western Jubilee Recording Company. The LP was a collection of favorite hymns, performed in the trio's distinctive three-part harmony. Horses, Cattle & Coyotes followed in 1999, and Sing One for the Cowboy was issued a year later. The early 2000s saw a career retrospective from the Sons, followed by a Christmas album, the For the Young, and the Young at Heart LP, and 2005's Way Out Yonder. Jack Hannah also released the children's book and CD The Value Mountain Trail. In 2011, the trio brought out A Cowboy's Song. In 2017, with Joe and Jack both over 80 years of age and Lon entering his sixties, the Sons of the San Joaquin announced the release of their final full-length album, One More Ride.