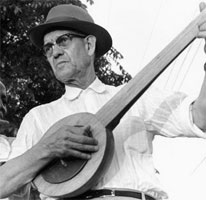 One of the most sadly overlooked masters of Appalachian folk music, Hobart Smith may not be widely known outside of those who happened to either see him at a '60s folk festival or the nascent folkies who were directly influenced by his driving, energetic banjo and guitar styles, but he arguably remains one of the most virtuosic performers his genre and era produced. Known as a quiet man, he clearly enjoyed the spotlight, transforming into a foot-stomping showman with rousing tunes and carefully embellished tales that identified him as the genuine article for a generation of musicians obsessed with such a cultural pedigree. A precise player of his own intricate arrangements of traditional old-timey tunes, Smith was an amazingly eclectic artist. Whether turning out deeply soulful country-blues on guitar, channeling Earl Scruggs-like energy on complexly nuanced banjo tunes, diving into hauntingly rhythmic fiddle tunes, or lightening the mood with jaunty piano tunes, his music is always stamped with an ear for fluid melody and hypnotic rhythms.
Born in 1897 in Saltville, VA, Smith was immersed in the authentic Appalachian musical culture, sharing a musical tradition seven generations old by the time he arrived. As such, Smith's father had him playing the banjo by the age of seven, the guitar by the age of 14, and the fiddle, mandolin, piano, and organ within a few years. By 1915, he was gaining employment on the minstrel show circuit and had started his own string band to play at a variety of social functions from auctions to prison camps. At an indeterminate point, the influence of the blues crept into Smith's musical vernacular, coloring his rendering of traditional tunes forever thereafter. By the time he befriended Clarence Ashley in 1918 (whom he greatly respected as a musician and was probably influenced by on some level), he was nearly earning a living as a musician, although he would still have to find employment as a farmer, wagoner, house painter, and butcher. By 1936, Smith had begun to play the day's commercial popular music and had gained such regional renown that he and his sister, Texas Gladden, were invited to play before Eleanor Roosevelt at the prestigious White Top Festival in Southwest Virginia, making such an impression on the first lady that the two would be invited to perform at the White House.
In 1942, Smith recorded 40 tracks for Alan Lomax and the Library of Congress, resulting in a set of English ballads; banjo, fiddle, and guitar pieces; and Virginia murder ballads, not to mention a relationship with Lomax that would prove beneficial in the coming years. Eventually, Lomax would introduce him to Moses Asch, resulting in the recording of a soon out of print album for Asch's pre-Folkways disc label. Even so, the album went on to become quite influential on the burgeoning folk revival scene in New York City and Smith was convinced to focus solely on his traditional repertoire. As the years wore on, Lomax continued to record Smith, introduce him to folk festivals, and conduct extensive interviews to present the depth of his musical legacy. As artists such as the New Lost City Ramblers' Tom Paley, John Cohen, and Mike Seeger, as well as Jody Stecher, Hank Bradley, and Fleming Brown took in his performances during the folk festival boom of the 1960s, Smith was finally embraced as the musical genius he was and would again enter the recording studio for Folk Legacy that fully indulged his love of odd and obscure traditional tunes. Still, by the time Smith seemed on the verge of capitalizing on his unique talents, his health began to fail him. In 1965, his status as a true giant of traditional music growing with each performance, he passed away without fully benefiting from his prodigious talents. Although his legacy has been carried on by those his music touched in his lifetime, renewed interest in Hobart Smith's music resulted in the excellent Blue Ridge Legacy release in 2001.