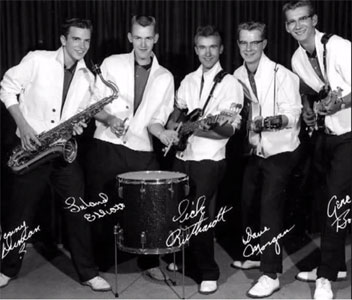 The Rumblers are known mostly for their one instrumental hit, "Boss," which made it to number 52 in early 1963. The Southern Californian group, however, recorded quite a bit in the subsequent two years, never repeating the success of "Boss." Though sometimes thought of as a surf band, they recorded in a variety of raucous instrumental rock & roll styles, as well as doing some vocal numbers. The Rumblers were formed at the end of the '50s by teenagers in the Los Angeles suburb of Norwalk, and by 1962, were doing some recording, hooking up with the small independent Downey label (based in the L.A. suburb of the same name). Downey had just one big hit, the Chantays' 1963 surf classic "Pipeline," and couldn't replicate the same level of success with the Rumblers, though "Boss" got to the Top Ten at some local stations, going all the way to number two on KFWB in Los Angeles. "Boss" and their local popularity, however, were enough to get them an LP on Downey and numerous follow-up 45s, including some recordings done under different names, such as the Nylons and Bel Canto's, whose "Feel Aw Right" has an arrangement by a young Barry White. Distinguished from some other acts associated with the surf scene by their prominent use of saxophones (at one point the lineup included two sax players) and a heavier R&B orientation, the Rumblers broke up in late 1965 after guitarist Johnny Kirkland was drafted. They evolved into the Interns, who had a 1967 single in the vocal garage-pop-rock style whose popularity had made surf music largely a thing of the past.