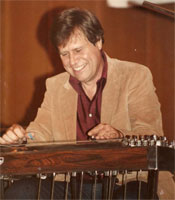 Not to pull the carpet out from anyone else with a slide bar, but Hal Rugg is one of the kings of the pedal steel guitar, acknowledged as a genius and inspiration just about every time a fellow player on this delicious-sounding and essential country & western instrument is interviewed about important influences. One of the great collaborations in country music is that between Rugg and the great singer/songwriter Loretta Lynn. Rugg appears on many Lynn recordings, creating a legacy of hot intros, solos, and general licks that will keep pedal steel players up each and every night.
Rugg began playing professionally in clubs and shows in the '50s around Tucson, AZ. He moved to Illinois to work the same sorts of jobs later in that decade, continuing on to Minneapolis in 1959 where he worked a regular gig at the ultra-hot Flame Club with Dave Dudley, the deep-voiced country baritone whose song "Six Days on the Road" is definitely one of the most famous truck driving country songs ever written. Various Grand Ole Opry acts such as Bobby Lord and Billy Grammer came through town, some of them encouraging Rugg to leave the frozen Minnesota tundra for the country-picking heaven of Nashville, which he finally did in 1961. It was a natural home base for a steel player to pick up work in bands, and Rugg began a long series of touring assignments with Lord, Jean Shepard, Stonewall Jackson, Bill Carlisle, and Leroy Van Dyke. In 1963, Rugg became a regular member of the George Jones band and got the chance to record his first real Nashville session. The album was entitled The Best of George Jones, a title fraught with peril as it is not only a difficult choice to make, but would even wind up being used as the title for a half-dozen different Jones collections. Nonetheless, this particular best-of actually included two instrumentals that showcased the talents of the young pedal steel player, quite a compliment for Jones to be paying Rugg. Either way, the label behind this project became so enamored with Rugg that he was contracted to a regular series of recording dates, becoming Rugg's first major account. He also recorded with Benny Barnes, Floyd Tillman, Johnny Mathis, Billy Walker, Jean Shepard, Ray Pillow, Ernie Ashworth, Nat Stuckey, Porter Wagoner, Norma Jean, Sammi Smith, Ray Stevens, Ronnie Milsap, Ray Price, Barbara Mandrell, k.d. Lang, Leon Russell, Eddie Rabbit, Johnny Russell, and, of course, the previously mentioned Lynn. Part of his success as a studio musician was his ongoing relationships with several key producers. One was Owen Bradley, who produced many of Lynn's albums, as well as the defining series of Patsy Cline albums that began to change the sound of country & western music to something a bit more sophisticated, a transition Rugg was certainly ready for with his happening musical chops. Another of Rugg's producing pals was Bill Walker, with whom he began working sometime in the early '70s. Walker was a producer for Capitol, creating record projects for the label's country artists such as Donna Fargo and Roy Clark. But he also wore the hat of bandleader on many Nashville awards shows and became the musical director on The Statler Brothers' Show in the '90s. Rugg appeared on this program for seven years. Rugg also appeared on many other television shows devoted to country music, including Country Junction, The Stu Phillips Show, The Wilburn Brothers' Show, Good Ole Nashville Music, The Jimmy Dean Show, and Music Hall America. He also sometimes steps outside of the country world, such as his recording sessions with folksinger Joan Baez or a rock album with Gene Pitney.
In 1963, Rugg joined the Grand Ole Opry and was a staff picker there until 1979. He was inducted into the Steel Guitar Hall of Fame in 1989. He has released two solo albums, Finally and Slidin' for Scale, on the Sweet T Music label. Firmly established as one of the honchos of the pedal steel, he is regularly in demand for special events focusing around the instrument, including gala jam sessions, instrument manufacturers' conventions, and educational workshops.