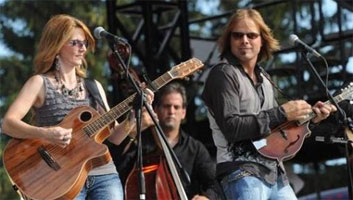 A bluegrass and songwriting duo, the Roys are actually brother and sister siblings Lee Roy and Elaine Roy, who were born in Fitchburg, Massachusetts, but grew up across the border in Coal Branch, New Brunswick, Canada, surrounded by bluegrass and old-time music. Lee was playing mandolin in a local bluegrass group by the time he was nine years old, while Elaine made her public singing debut at the age of ten. The two began performing as a duo, developing a sound that blended bluegrass, country, folk, and gospel with a strong songwriting sense, all brought home with the kind of striking Vocals harmonies that only siblings seem to be able to generate. They built a following on the New England circuit before moving to Nashville, where they launched their own label, Pedestal Records, and released a pair of albums, The Roys and Good Days, in 2006, then signed with Rural Rhythm Records, which issued Lonesome Whistle in 2011, New Day Dawning in 2012, and Gypsy Runaway Train in 2013.