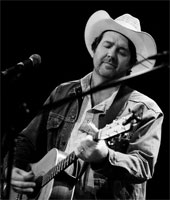 The Austin, TX-based singer/songwriter Bruce Robison issued his self-titled debut LP in 1995. He also attracted notice thanks to his inclusion on several compilations, including 1995's Austin Country Nights: Rising Stars From the Heart of Texas collection and True Sounds of the New West. The full-length Wrapped followed in 1995, and his sophomore effort, Long Way Home From Anywhere, appeared four years later.
He switched to Boar's Nest for 2001's Country Sunshine, which featured a co-billing for his wife, Kelly Willis. The two cut a Christmas record called Happy Holidays in 2006 -- that same year he released the solo Eleven Stories -- and in 2007 he signed with Premium for It Came from San Antonio. He stayed there for the next decade, releasing The New World in 2008 and two duet albums with Willis -- Cheater's Game and Our Year -- in 2013 and 2014. He formed the Back Porch Band for his 2017 album, Bruce Robison & the Back Porch Band.