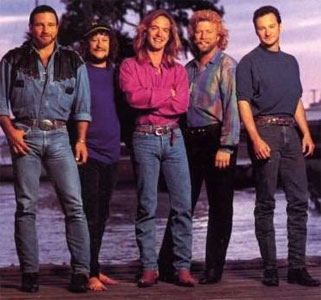 A group of five session musicians who formed in 1987 in order to have a little fun, the Pirates of the Mississippi were one of a handful of country bands who emerged in the wake of the Kentucky Headhunters' success in the early '90s. The Pirates of the Mississippi didn't blend genres or joke around like the Kentucky Headhunters, yet they weren't smooth country-rock like Alabama. Instead, they were a straightforward country band, with hints of ragged enthusiasm and exceptional instrumental and vocal skills. Though the band wasn't able to capitalize on the success of their one big hit single, 1991's number 15 "Feed Jake," the group continued to record through the mid-'90s.
All five members of the Pirates of the Mississippi -- Bill McCorvey, Rich Alves, Dean Townson, Jimmy Lowe, and Pat Severs -- were Nashville session musicians during the '80s. In 1987, they began playing together regularly, usually in clubs around Nashville. Eventually, an A&R representative at Capitol Nashville signed the group to a deal. In the summer of 1990, their eponymous debut was released, as was their cover of Hank Williams' "Honky Tonk Blues." The single reached number 30, yet the follow-up, "Rollin' Home," stiffed.
Walk the Plank, the band's second album, appeared in 1991 and proved to be their breakthrough release, thanks to the single "Feed Jake." A sentimental song about the death of a childhood friend, "Feed Jake" and its video became a big hit, leading to the band being named the Top New Vocal Group by the Academy of Country Music. Though they had two other singles from the album -- "Speak of the Devil" and "Fighting for You" -- nothing else from the record was a hit. A Street Man Named Desire, the band's third album, also suffered from poor sales upon its 1992 release, as did their fourth record, 1993's Dream You.
Following the poor sales of Dream You, the compilation Best of the Pirates of the Mississippi appeared in 1994, and the band was dropped from Liberty and Capitol Nashville. Later that year, Pat Severs left the group and was replaced by Greg Trostle. In 1995, the Pirates of the Mississippi signed with Giant Records and released Sure Sign. Also appearing that year from Giant was Paradise. Heaven and a Dixie Night was released in 2006 by Evergreen Records.