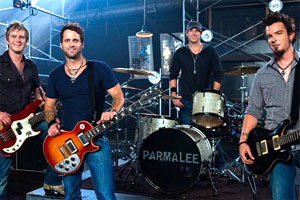 Parmalee is a tight-knit Southern country-rock band consisting of brothers Matt Thomas (guitar, Vocalss) and Scott Thomas (drums), cousin Barry Knox (bass), and childhood friend Josh McSwain (guitar, keyboards), all of whom grew up together near Greenville, North Carolina. The brothers' father had a local band, and by the time they were teenagers, they were a part of it, gigging as Jerry Thomas & the Thomas Brothers Band, and Knox was recruited aboard as well. When the elder Thomas retired from playing, the brothers and cousin continued as the Thomas Brothers Band, working the local bar circuit, where they often crossed paths with guitarist, keyboardist, and longtime friend McSwain, who was in a successful cover band at the time. McSwain sat in with the Thomas Brothers Band one night in 2001 and the rest, as they say, was history. Rechristened Parmalee, the band meshed bluegrass, traditional country, Southern rock, and blues into a crisp, professional country-rock sound, spurred by solid songwriting and the fact that each member was a multi-instrumentalist. An EP, Daylight, appeared in 2002, followed by a full-length, Inside, in 2004. A second EP, Complicated, arrived in 2008. The band next signed with Stoney Creek Records and released a pair of singles, "Musta Had a Good Time" in 2012 and "Carolina" in 2013. Their first album for Stoney Creek, Feels Like Carolina, was released at the end of 2013.