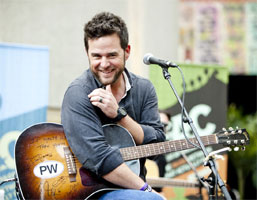 Born and raised in Kennett, MO, country singer and songwriter David Nail was drawn at first to sports, particularly baseball, but found himself dreaming of a music career too, and as time went by, he put more and more of his time and energy in the direction of music. He received a few college offers to play baseball, but chose to go with music instead, and moved to Nashville. Music City was just too overwhelming the first time around, and he was back home in Missouri within a year. He tried Nashville again, this time landing a recording contract with Mercury Nashville Records in 2002, and recorded a self-titled album with producers Keith Stegall and John Kelton. The first single from the project, "Memphis," brushed near the Top 50 on the Billboard country charts, and the future seemed bright. Unfortunately, Stegall departed the label in a shakeup, and the album was never released. Frustrated, Nail turned his attention to coaching baseball, but he wasn't quite through with his music dream. Introduced by a mutual friend to producer Frank Liddell, he ended up signing a recording deal with MCA Nashville in 2007 and tracking a second album. A pair of singles from the project, a cover of Train's "I'm About to Come Alive" and "Red Light," both hovered around the bottom of Billboard's Top 50 country chart. The album, I'm About to Come Alive, was released August of 2009.
Nail followed this success with widespread touring before entering the studio in early 2011. He then pre-released "Let It Rain," which hit number 11 just before the issuing of his second album, The Sound of a Million Dreams, in November of 2011 it and eventually went on to become Nail's first country chart number one in early 2012. Next, a summer 2012 E.P. provided a minor hit in the shape of "Someone Like You", a cover of the Adele song, before he began to make plans for a third solo studio full-length. Ahead of the arrival of I'm a Fire, came the single "Whatever She's Got," which climbed to number two on the Billboard country charts (and number one on the Billboard country airplay number charts) in the fall of 2013. I'm a Fire appeared in March 2014, preceded by its second single "Kiss You Tonight."