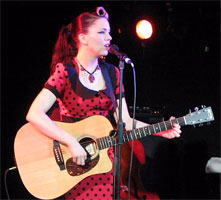 Inspired by the vocal jazz of Billie Holiday, blues singers like Elmore James, and the sound of rockabilly icons like Wanda Jackson, Imelda May's sophisticated take on rock plays outside norms of pop culture trends. She won an international fan base as leader of the swing outfit Blue Harlem before making her major-label solo debut with the fiery, rockabilly-steeped Love Tattoo in 2008. It went to number one in her native Ireland. She returned to the top of the charts with 2010's Mayhem as well as with 2014's Tribal, her fourth studio album. With 2017's Life. Love. Flesh. Blood, May further transformed her sound, embracing a dusky blend of contemporary rock and deeply personal ballads, accented by contributions by Jeff Beck and Jools Holland. Following her 2020 spoken word EP Slip of the Tongue, she returned to her evocative pop sound with 2021's 11 Past the Hour, collaborating with Rolling Stones guitarist Ron Wood, Oasis' Noel Gallagher, and Miles Kane.
Born Imelda Mary Clabby in Dublin in 1974, May began playing the city's club circuit at age 16. After studying art and printmaking in college, she moved to Britain and soon landed a tour with rhythm and blues revivalist Mike Sanchez. Her solo debut, No Turning Back, followed in 2003 under the name Imelda Clabby. It featured a notable backing band consisting of her then-husband, guitarist/co-songwriter Darrel Higham, along with trumpeter/multi-instrumentalist Dave Priseman, bassist Al Gare, and drummer Steve Rushton. After she made a bigger name for herself as leader of Blue Harlem, the debut was remixed and reissued under her adopted stage name, Imelda May, in 2007. It led to some high-profile performance opportunities, including a tour with Jools Holland. In 2008, Blue Harlem accepted an invitation from director Baz Luhrmann to perform at the premiere of his 2008 film Australia. That year, May went to the top of Ireland's album chart with her second solo album, the self-produced Love Tattoo. Released by Universal, it saw Higham, Priseman, and Gare joined by keyboardist Danny McCormack and drummer Dean Beresford.
Buoyed by the success of Love Tattoo, the singer's third long-player, Mayhem, returned her to the number one spot in Ireland upon its arrival in September 2010. This time, she also cracked the Top Ten in the U.K. and spent a week on the Billboard 200 (at number 108). Featuring the backing crew from her debut, it included a rockabilly-based version of Gloria Jones' "Tainted Love," previously made famous by Soft Cell in 1981.
May and Higham welcomed their first child before they and the rest of the band returned to the studio, this time with co-producer Mike Crossey (Arctic Monkeys, Foals). Released in April 2014, Tribal became May's third straight number one in Ireland and reached a career-high number three in the U.K. It also featured her first Top 20 single, "It's Good to Be Alive."
May and Higham divorced before she recorded her next album, with Higham launching a solo career of his own. May returned in 2017 with a more stripped-down, earnest set produced by T-Bone Burnett. Titled Life. Love. Flesh. Blood, it featured performances by numerous friends and collaborators, among them Jeff Beck and Jools Holland. The album was well-received in Ireland and the U.K., where it reached number two and number five, respectively. She returned in 2020 with Slip of the Tongue, a musical spoken word EP issued by Universal. Derived from personal notebooks, it addressed topics including heartbreak, obsession, and isolation. At the end of the year, May delivered the first new material from her sixth studio album with the track "11 Past the Hour." A follow-up, "Just One Kiss," appeared at the beginning of 2021, and saw her teaming up with Noel Gallagher and Ronnie Wood. The Tim Bran (James Morrison, London Grammar) co-produced album, 11 Past the Hour, was issued a few months later.