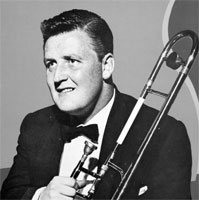 The usual perception about the history of English rock & roll is that very few of the jazzmen who preceded it managed to find much success with the new music. Don Lang was the exception. Born Gordon Langhorn in Yorkshire, he was originally a trombone player specializing in dance music and played with bands led by Teddy Foster, Vic Lewis, and others, and he made his first records with Lewis' orchestra. It was as a member of a band led by Ken Mackintosh that he began making appearances on record as a singer, initially under his given name. Eventually, he took the name Don Lang and went solo in the mid-'50s, initially cutting records for English Decca. In 1955, he jumped to HMV Records, part of the EMI group of labels, and hit the Top 20 in England with a superb recording of "Cloudburst," which featured a dazzling scat Vocals performance by Lang. In 1956, as skiffle music and then rock & roll began making themselves felt in England, Lang and his band the Frantic Five began working with the new music. The group also became a regularly featured act on The 6.5 Special, the first British television variety series to acknowledge rock & roll and Lang also sang the theme song each week.
Despite his weekly exposure on television, Lang had trouble selling records until 1957, when he charted with a cover of "School Day," the Chuck Berry song. He subsequently reached the British Top 10 with his version of "Witch Doctor," a novelty tune by David Seville, the future creator of Alvin & the Chipmunks. Lang remained popular into the very early '60s and then he returned to his jazz-pop roots, leading a band that remained fully employed on England's dancehall circuit for many years. Lang wasn't forgotten by the British rock music world, however, and on June 21, 1968, he was one of four trombonists engaged to perform on the Beatles song "Revolution 1" from the group's White Album. Fondly remembered by British audiences from his days on The 6.5 Special, he occasionally turned up on the British oldies circuit and also could be found playing jazz again during the 1970s and early '80s. He retired late in the decade, even as his son Brad Lang became visible as a bassist with the groups ABC, Jade Warrior, Wham, and Wishbone Ash. Lang died of cancer during the summer of 1992, after a long illness. His music is best known in England, where Castle Communications has issued compilations of some of his vintage recordings.