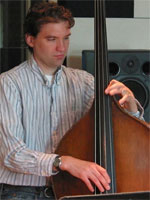 Eclectic composer and double bassist Viktor Krauss was born in Champaign, IL, in 1969. His youth was spent listening to soundtracks and instrumental music, eventually leading him to the piano and trumpet. After witnessing the power and girth of the double bass at a middle school concert, the budding musician began looking outside of the traditional music programs offered by the public school system. He soon began playing with local jazz groups and accompanying others, including his famed fiddle-bound sister Alison. In high school, Krauss explored the worlds of rock, soul, and R&B and began to write material that shared these new influences, eventually leading to the study of bass, voice, electronic, and tape music at the University of Illinois. A Zappa-esque rock unit called Difficult Listening was formed with fellow musician Sean Smith in the late '80s. The duo played locally at (mostly) university venues before disbanding in 1992, when Krauss joined progressive bluegrass pioneer Peter Rowan's Free Mexican Airforce group, where he found himself playing for Mountain Stage and Prairie Home Companion. After his tenure with Rowan, he began a decade of work with Lyle Lovett, touring and recording with the country icon until 2003. In between, he managed to find the time to contribute to countless recordings by the likes of Dolly Parton, Bill Frisell, and the Chieftains, as well as making an appearance on his sister's 1999 solo album Forget About It. With credits for producing, composing, recording, and touring, Krauss finally found the time to record his solo debut, Far From Enough. Featuring an all-star band consisting of Frisell, Jerry Douglas, Steve Jordan, and sister Alison, it was released in February 2004. Krauss' second album, II, which featured appearances by Shawn Colvin and Lovett as well as a cover of Pink Floyd's "Shine on You Crazy Diamond," emerged three years later.