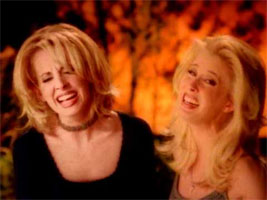 Twin sisters from Philadelphia with impeccable harmonies and an energetic sense of country swing, Heather and Jennifer Kinley, born November 5, 1970, were influenced by the harmonies of other familial country pairings like the Everly Brothers and the Judds. At the age of 19, the twins moved to Nashville and worked on their songwriting and performing, with Heather on guitar and Jennifer on piano. They spent more than five years toiling in Music City's underground before finally finding a winning song, "Just Between You and Me." Co-written with Russ & Debbie Zavitson, it brought the major labels calling, and the Kinleys signed with Epic.
After working with producers Tony Haselden and Peter Greene (as well as Russ Zavitson), the Kinleys released their debut album, Just Between You and Me, in September 1997. Their debut single, "Please," hit the country Top Ten and even crossed over to the pop charts, then the song that had started it all for them, "Just Between You and Me," made the country Top 20. The album settled in for a run of almost a year on the country charts, eventually going gold. Meanwhile, album tracks "Dance in the Boat" and "You Make It Seem So Easy" made minor appearances in the country charts. As a result, the sisters were named Best New Duo by the Academy of Country Music and garnered nominations from the Grammys, the Country Music Association, and the American Music Awards.
In the fall of 1998, they were represented by "Somebody's out There Watching" on the million-selling television soundtrack album Touched by an Angel. Released as a single, the song made the country Top 20 and crossed over to the pop charts. In August 1999, the Kinleys returned to the country charts briefly with the one-off single "My Heart Is Still Beating," but they spent a long time crafting their second album, working with Russ Zavitson and Tony Haselden again for half of it, but turning to Radney Foster for help in completing it. The album was heralded by an advance single, "She Ain't the Girl for You," which broke into the country charts in April 2000. The Kinleys II finally appeared in July.