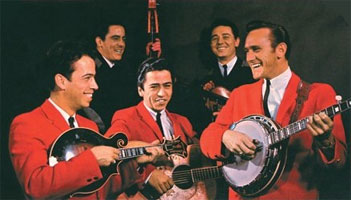 Progressive bluegrass band the Kentucky Colonels had a short but legendary career during the folk revival of the late '50s and early '60s. The band was formed in Los Angeles in the early '50s by brothers Roland, Eric, and Clarence White and their sister Joann. When Joann dropped out, the three brothers began billing themselves as the Three Little Country Boys and appeared on local television after winning first prize in a talent contest. In 1958, Arkansas native Billy Ray Lathum became their banjo player and Dobro player Leroy Mack joined the band the next year. Latham's arrival allowed Roland White to switch to mandolin, his instrument of choice.
As the Country Boys, the group recorded its first single, "I'm Head Over Heels in Love with You." They began appearing on Town Hall Party and Hometown Jamboree and recording on Gene Autry's label. Bassist and banjoist Roger Bush joined the band in 1961 after Eric dropped out to marry. Three Little Country Boys then recorded Songs, Themes & Laughs from the Andy Griffith Show for Capitol. Before the year was out, Roland was drafted and left the band for two years, leaving them without a mandolinist. The group cut its first album on Briar, which disliked the band's moniker and suggested a series of names, the best of which was the Kentucky Colonels. In 1963, fiddler Bobby Sloane joined the Colonels and Roland returned as well. By this time, the Colonels had begun to gather a following through their U.S. tours, and appeared at both the UCLA and Newport folk festivals in 1964. The band recorded several albums and appeared in the movie The Farmer's Other Daughter. They really took off musically when fiddler Scotty Stoneman replaced Sloane, but broke up shortly thereafter in 1965, with the members going their separate ways.