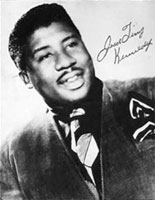 Tiny Kennedy was anything but diminutive, either in stature or Vocals range. "Big and fat" was how Trumpet Records boss Lillian McMurry vividly described him, and she should know: Trumpet recorded the shouter in 1951 and again in 1952.
The Vocalsist, born Jesse Kennedy, Jr., had recorded with the great Kansas City pianist Jay McShann for Capitol in 1949 prior to joining Tiny Bradshaw's jumping band as one of its featured front men. After a session with Elmore James in 1951 didn't result in anything releasable, McMurry sent Kennedy up to Sam Phillips's fledgling Memphis Recording Service in September of 1952. Musicians on the session, which produced the fine "Strange Kind of Feelin'," "Early in the Mornin', Baby" (with overdubbed crowing by "Elmer, the Disc Jockey Rooster"), and "Blues Disease," included guitarist Calvin Newborn and saxist Richard Sanders. After a 1955 date for RCA's Groove subsidiary, Kennedy disappeared permanently from the R&B scene.