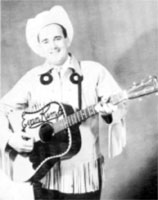 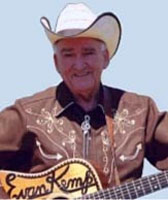 Evan Kemp was born in Vancouver, British Columbia, but, it was growing up in the Canadian prairies that began his love for music. A childhood accident at the age of six left him almost blinded for the good part of a year and it was then that he began to listen and love the music of his heroes like Wilf Carter and Eddy Arnold. That's when he started to learn to yodel.  When the Kemp family moved back to Vancouver, Evan began selling magazines on Vancouver streets. To entice customers, he would display his yodeling talents if they bought his magazines. One evening, CJOR disc jockey, Bill Rea, heard Evan and took the young yodeler right to the station and put him on the air .That's how it all began. He was nine years old.  Evan began working with his first band, the BC Ranch Boys who later became the Trail Riders. They toured regularly for six months of each year and Evan and his Trail Riders played to enthusiastic audiences across Western Canada. With no television and limited radio reception, the traveling entertainment group was a highlight in every community .  Evan began recording in the 1950's with Aragon Records and continued throughout the 60's, producing many LP's and 45's including his own compositions like Lonely Old Blues, Three Little Words and On the Golden .Shore. In 2001, a compilation of some of Evan's favorite tunes was released on CD, "The Best of Evan Kemp.  Evan was sidelined for a time in 1989 after suffering a stroke. But, with a great deal of perseverance and dedication, he rallied and provides inspiration to many who face the same challenges as a result of strokes. He continues entertaining with live appearances in the Vancouver area and is requested regularly on "The Wilf Ray Show" on 600 AM Radio in Vancouver. His rendition of The Man We Never Knew has become a tradition on the Remembrance Day show at the Orpheum Theatre in Vancouver, Canada.