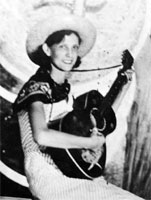 Moonshine Kate (b. Rosa Lee Carson, Oct. 10, 1909 - d. 1992, Bainbridge, Georgia) was an American country banjoist, guitarist and singer. She was one of the earliest women to record country music, first appearing on record in the 1920s with her father Fiddlin' John Carson.
Kate was the ninth and last child born to Jenny Nora Scroggins and John Carson. She began appearing with her father at dances and political gatherings at the age of five, and could play guitar and banjo by fourteen. She toured with her father's band, the Virginia Reelers, in the Southeast United States, and performed on Atlanta radio station WSB.
Her first record was cut in 1925 at age fifteen, accompanying her father on two Okeh Records releases. She also recorded two solo songs, "The Lone Child" and "Little Mary Phagan", the last written by her father about Leo Frank. She played and recorded with the Virginia Reelers until 1934, adopting the stage name Moonshine Kate in 1928 at the suggestion of Okeh Records man Polk Brockman. Many of Kate's recordings for Okeh play up her name, consisting of short musical passages interspersed with quick-witted dialogues revolving around the moonshine trade.
The Great Depression ended the Carsons' recording days, and she continued to perform intermittently, also working with Eugene Talmadge on his 1932 bid for Governor of Georgia and for the Atlanta Department of Recreation. She married in 1944 and retired in Georgia. In 1983, both she and her father were inducted into the Atlanta Country Music Hall of Fame.