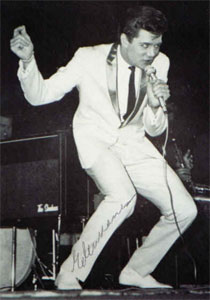 Eden Kane was one of England's pre-Beatles teen idols, part of the same wave of youthful pop/rockers that produced John Leyton, Adam Faith, et al. His main impact on music was confined to the early '60s, although he was popular enough to have enjoyed 40 years in the music business. He was born Richard Graham Sarstedt in New Delhi, India, on March 29, 1941 (some sources say 1942) to Albert and Coral Sarstedt -- both of his parents were civil servants. The family moved to Kurseong near Darjeeling, in the shadow of Mt. Everest, where they took over management of a tea plantation. The family lived in India until 1954, when Albert and Coral decided it was time to move to England -- Albert made preparations for the transition but passed away before the family actually arrived in England.
In England at the time, skiffle music was just taking off, and in another year or so rock & roll's first impact would be felt. Richard Sarstedt was old enough to consider career choices, including architecture, but instead he chose music. He discovered, to his delight, that he was a natural guitarist, and his voice and good looks made him a potential serious frontman for a band. He'd been inspired initially by Bill Haley, and later formed his own skiffle group -- called the Fabulous 5 -- which included his younger siblings Peter and Clive. He also got a small acting role in the movie Drinks All Round (1960). In 1961, Sarstedt entered a contest in Chelsea and not only beat the competition but picked up a management contract with Michael Barclay and Phillip Waddilove, as well as a chance to do a sponsored recording -- courtesy of Cadbury's Chocolate -- called "Hot Chocolate Crazy," an advertising jingle. That song was enough to get Decca Records interested in signing Sarstedt, who thereafter picked up the more distinctive stage name Eden Kane. The first name was a Biblical reference, and an attempt to emulate the appeal of Adam Faith, while the last name came from Citizen Kane, the favorite movie of his co-manager, Michael Barclay.
He hit the number one spot with his debut Decca release, "Well I Ask You," in 1961. This was followed by a series of hit singles: "Get Lost," which reached number ten; "Forget Me Not," which peaked at number three; and "I Don't Know Why," which topped out at number seven. Kane spent an astonishing 74 weeks on the charts between 1961 and 1963, and he and his band, the Downbeats (Roger Retting, Ben Steed, Roger St. Clair, and Bugs Waddell), were booked on tours alongside such stars of the era as Cliff Richard, Billy Fury, Joe Brown, Helen Shapiro, Marty Wilde, and John Leyton.
But his fifth Decca single, "House to Let," failed to chart, and four subsequent releases also disappeared from view very quickly. By 1963, he'd been dropped by Decca. Kane subsequently signed to Fontana Records, where his first two singles also stiffed. Finally, in 1964, "Boys Cry" reached number eight. Kane's days at the top of the charts ended with the advent of the Merseybeat boom in 1963. During the transition period, from mid-1963 into 1964, however, he made numerous appearances on television in tandem with the likes of the Beatles, the Rolling Stones, et al. Despite his continued exposure on television and the chart success of "Boys Cry," by the end of 1964 his music was considered part of the past. He still saw enthusiastic audiences on a tour of Australia, however, and was never without work, even if the chart placements were over by 1965, along with any regular opportunities to record.
Kane later moved to America and married journalist Charlene Groman (the sister of actress Stefanie Powers), whom he had first met while passing through the United States in the mid-'60s. He has remained active in the entertainment business in the States, as a producer, and has occasionally returned to England for oldies package tours with such veteran performers as Marty Wilde and Joe Brown. Younger brother Peter Sarstedt emerged as a star in his own right in 1969, working in more of a folk-based pop vein, and his other younger brother Clive worked with Joe Meek for a time in the 1960s and enjoyed a hit single in England in the 1970s. The three Sarstedt brothers also recorded together during the 1970s.