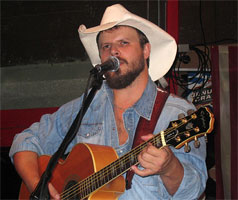 Singer/songwriter Jamey Johnson is just as comfortable mopping up the tears on the barroom floor with an old Hank Williams-style ballad as he is tearing the roof off with a honky tonk juggernaut. The Alabama native and ex-Marine rose to the top of the Nashville food chain through blood, sweat, and tears. Raised in a devout and deeply musical family helped the new traditionalist find his voice, but it wasn't until he moved to Music City that the world began to take notice. After laying low for nearly a year, he began appearing at songwriter nights, where he met other writers. As his peers began securing publishing deals, they would ask Johnson to sing on their demos. In 2002, mutual friend and songwriter Randy Hardison turned producer/songwriter Buddy Cannon on to Johnson — the two became close friends and allies after Hardison's death later in the year. Johnson's next convert was publisher Gary Overton, who signed the budding songwriter to EMI. In April of 2005, Johnson signed a record contract with BNA and released his debut, The Dollar, in January of 2006. After a tour supporting the album, he was dropped from the label. He and his wife separated, then divorced, sending Johnson into seclusion for a year before he re-emerged, renewed and ready to begin work on a new album. Two major labels showed interest, but it was the Universal imprint Mercury that signed the artist and released his album That Lonesome Song in August of 2008.
The first single off the album, "In Color," reached number nine on the Billboard Country chart, followed by "The High Cost of Living," which peaked at number 34. The album was certified gold. At the 2009 Country Music Association Awards, Johnson won Song of the Year for "In Color," and was nominated for various other honors. He followed up his success with an ambitious double album called The Guitar Song in the fall of 2010, preceded by the single "Playing the Part." The album, its singles and videos, gained nearly universal critical acclaim and sold exceptionally well, particularly for a double album. Johnson followed it in the fall of 2012 with Livin’ for a Song: A Tribute to Hank Cochran, which featured a slew of guests including Willie Nelson, Vince Gill, Merle Haggard, Leon Russell, and Kris Kristofferson.