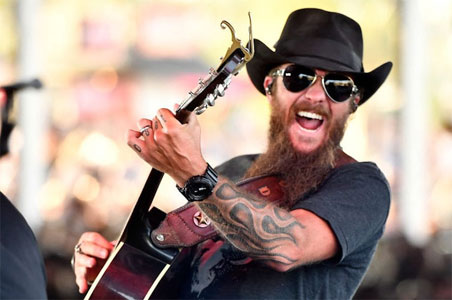 Evoking classic styles from outlaw country to Southern rock, Cody Jinks shifted from a career in thrash metal to that of a successful country rebel, issuing several well-received indie releases in the early 2010s before breaking into the mainstream with his self-released sixth album, I'm Not the Devil, which reached number four on the Billboard country charts in 2016. With his smooth baritone and lonesome, dark-hued country songs, the Texas native parlayed his newfound success into a deal with Rounder Records, making his label debut with 2018's Lifers.
A native of Haltom City, Texas, Jinks spent the early part of his career fronting the Fort Worth-based thrash metal outfit Unchecked Aggression before returning to his country roots and recasting himself as a honky tonk balladeer in the late 2000s. Beginning with 2010's Less Wise, Jinks issued a handful of independent releases, touring heavily with his backing band, the Tone Deaf Hippies. His first chart success came with 2015's Adobe Sessions, which was named after the Adobe Room at Tornillo, Texas' Sonic Ranch studio where it was recorded. The album peaked at number two on Billboard's Heatseekers chart, bringing Jinks into wider mainstream exposure. Returning to Sonic Ranch, he recorded his follow-up, the self-released I'm Not the Devil, which jumped to number four on the Billboard Country Albums chart upon its release in August 2016. While Jinks worked on his next record, Less Wise (Modified) -- a remixed and remastered version of his 2010 debut -- was reissued in 2017 to fill the gap. In the spring of 2018 it was announced that he had signed a deal with Rounder Records and that Thirty Tigers would be reissuing his entire back catalog. Led by the single "Must Be the Whiskey," Jinks' Rounder debut, Lifers, appeared in June of that year. Lifers debuted at 11 on Billboard's Top 200, and number two on their country charts.
Jinks returned in October 2019 with a pair of new albums: After the Fire and The Wanting, both released on his own imprint, Cody Jinks Music.