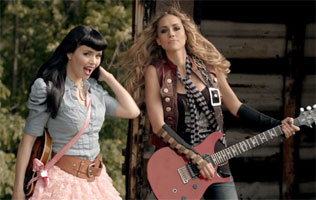 Singer, mandolin player, and ace fiddler Susie Brown and singer and guitarist Danelle Leverett were each pursuing their own solo musical careers when they were introduced to each other by songwriter Kris Bergsnes after one of Brown's sets at a Nashville club. Brown and Leverett sensed a strong musical affinity and began writing songs together, which in turn led to the pair forming a country duo called the JaneDear girls. The duo’s Nashville-area gigs attracted industry attention, and with the help of John Rich, who became a big supporter, the JaneDear girls soon had deals with Warner Music Nashville, Sony/ATV Tree Music Publishing, and the Turner Nichols & Associates Management firm. With Rich producing, the pair released the single “Wildflower” in 2010, following it with a full-length album, the self-titled the JaneDear girls, early in 2011.