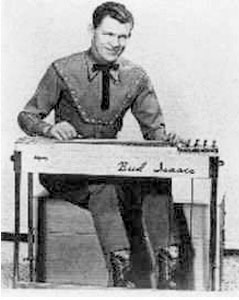 Bud Isaacs was playing steel guitar professionally at the age of 16, and after playing on some local stations, he relocated to Nashville. He began to play on the Grand Ole Opry in 1951 with Eddie Hill, later joining Little Jimmy Dickens. In 1953, he was responsible for the addition of foot and knee pedals to a steel guitar. By careful footwork, he was able to vary the tension on individual strings and change the pitch of a single string so as to alter individual chords. His idea caused a sensation, as it had previously been considered impossible to change anything less than a whole chord at one time. The first recording to feature his new invention was when Isaacs played it on Webb Pierce's hit recording of "Slowly" in 1954. (Jimmy Day had played steel on earlier versions by Pierce.) His idea revolutionized the sound of steel guitars on country recordings, and most of the leading exponents of the instrument soon followed his lead.
Isaacs was much in demand for session work but he also made solo recordings in the mid-'50s for RCA Records, including his lilting "The Waltz You Saved for Me." In 1955, he became a member of the Ozark Jubilee, appearing on radio and television programs with the star, Red Foley. It has been reported that Isaacs played on 11 top country hits of the year in 1955. In 1958, Isaacs, with Chet Atkins, Homer Haynes, Jethro Burns (Homer & Jethro), and Dale Potter, recording as the Country All-Stars, cut "String Dustin'," a very uptempo release. Isaacs married Geri Mapes, a yodeler, singer, and bass player, and they worked together with an act they called the Golden West Singers. He continued to play on countless recordings and was inducted into the Steel Guitar Hall of Fame in 1984; they eventually retired to Arizona, where Isaacs died in 2016 at the age of 88. Isaacs will always be remembered for his dazzling steel guitar playing, especially his catchy "Bud’s Bounce." His 1955 RCA Victor EP Crying Steel Guitar later became a highly prized collectable.