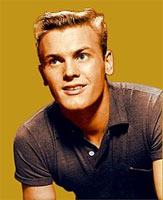 Born Arthur Gelien, 11 July 1931, New York City, New York, USA. This blond-haired, blue-eyed pop Vocalsist/actor was spotted in 1948, working at a stable, by talent scout Dick Clayton. He introduced him to Rock Hudson’s Hollywood agent Harry Wilson, who said ‘We’ve got to tab you something’, then named him Tab Hunter. He made his screen debut in the 1950 movieThe Lawless and two years later co-starred with Linda Darnell in the British feature Saturday Island (US title: Island Of Desire). In late 1956 he received a phone call from Randy Wood, president of Dot Records, asking him to record a song recently cut by US country star Sonny James, the lilting ballad ‘Young Love’. Both versions made the US charts, Hunter reaching number 1 and James peaking at number 2. Hunter also topped the UK chart, but James lagged behind at number 11. He continued recording for Dot and hit with the slightly up-tempo ‘99 Ways’, which narrowly missed the US Top 10 but made the UK Top 5 (1957). In the following year he appeared in the film version of the Broadway show Damn Yankees, with Gwen Verdon and Ray Walston. As Warner Brothers had him under contract to make films, they resented him recording for Dot and established their own record label in 1958. He signed, with moderate success, and in 1960 starred in his own NBC US television series. Hunter continued his acting and appeared opposite Fabian in the 1964 ‘beach party’ featureRide The Wild Surf. He was still acting in the 80s, notably with Divine in John Waters’ Polyester andLust In The Dust, and also in the Grease sequel, Grease 2. In the late 80s Hunter moved to Mexico to write, and set up a film production company, one of the fruits of which was the 1992 ‘family’ picture Dark Horse.
Tab Hunter died on July 8, 2018 at his home in Sanra Barbara, California.