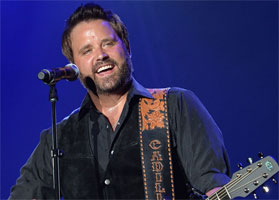 Country singer and songwriter Randy Houser was born and raised in Lake, MS, where his love of music was apparent even as a young child. He started fronting bands when he was around 13 years old and continued playing local gigs all the way through high school. While attending East Central Community College he realized playing music had its financial rewards as well, and he began working on his songwriting. He also formed 10lb. Biscuit, and the band was quite well received on the local circuit. Houser relocated to Nashville, TN, in 2002 and landed a song publishing deal. One of his songs, "Honky Tonk Badonkadonk," became a big hit for Trace Adkins in 2005. Houser began concentrating more on the performing side of things and started playing more local gigs, which eventually led to a record deal with Universal Records South. The label released his debut single, "Anything Goes," written by Brice Long and John Wayne Wiggins, in May of 2008, followed later in the year by a debut album, Anything Goes. Thanks to the Top Ten country single “Boots On,” the album performed well, peaking at 21 on the Billboard album charts, and Houser returned in 2010 with his second album, They Call Me Cadillac. The album peaked at eight on the Billboard Country charts but none of the record's singles turned into hits, nor did the non-LP "I'm All About It." After its release, Houser left Show Dog/Universal and signed with Stoney Creek Records, releasing How Country Feels in January of 2013.