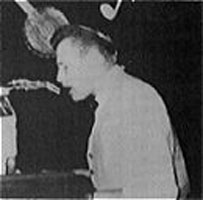 Glenn Honeycutt was a singer/guitarist who came to Memphis from Mississippi, the same route as a younger contemporary of his named Elvis Presley -- who also happened to be a cousin of his (their grandmothers were sisters), though they never did meet. Born near Belzoni, MS in 1933, Honeycutt was brought up in Memphis after the death of his father. He was always musically inclined, and after the draft pulled him into the military for a couple of years, he decided to try making it as a musician. By 1954, Honeycutt was playing and singing around Memphis and auditioned for Sam Phillips at Sun Records -- a balladeer by inclination, Honeycutt came in with a few country-style songs, but was rejected on that basis. The following year, however, he was leading a band called Glenn Honeycutt & His Rhythmaires, which included guitarist Jack Clement in its ranks. And when Clement was hired at Sun, he persuaded Phillips to give Honeycutt another chance -- the result was one of the best records that Sun never issued, "Rock All Night." Actually, the latter apparently was scheduled and then pulled for its risqué lyric. Instead, Honeycutt's sole Sun release was "I'll Be Around"/"I'll Wait Forever." There were a dozen sides recorded, most of which never surfaced, and Honeycutt subsequently recorded for labels such as Black Gold ("Right Gal Right Place Right Time" b/w "You'll Die of Loneliness"), and Fernwood ("Tombigbee Queen" b/w "Campus Love"), all without notable or lasting success. He kept his day job with the United States Postal Service in Memphis, and might have been a footnote in history had it not been for fellow country artist Randy Rich, who brought Honeycutt's name to Rhythm Bomb Records, a London-based rockabilly revival label -- the result was a tour of Germany and Sweden, on which Honeycutt proved he could still deliver musically, and the recording of Honeycutt's first album, 40 years after he entered the business. And just to prove that Honeycutt still had what it took after all of those years, of the 12 songs on Mr. All Night Rock, 11 were originals.