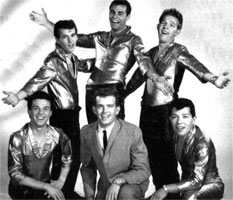 The Hollywood Argyles were a quickie act thrown together by producers Kim Fowley and Gary Paxton and featuring Sandy Nelson. Fowley made his first recordings with drummer Nelson during the late '50s and had already produced a number of short-lived groups -- including the Paradons and the Innocents -- and found his first taste of success by producing a handful of successful efforts by Arizona schoolmates Gary ("Flip") Paxton and Clyde ("Skip") Battin, who performed under the name Skip & Flip, and scored two Top 20 hits in 1959, "Cherry Pie," (number 11 Pop) and "It Was I" (number 11 Pop). Immediately after dissolving Skip & Flip, Paxton and Fowley created a novelty doo wop-inspired group -- a one-off collective of local musicians and Vocalsists -- and called them The Hollywood Argyles.
In 1960, this "group" actually topped the charts with the number one smash hit "Alley Oop," a flagrant Coasters ripoff that had been written and performed by future country artist Dallas Frazier a few years earlier in 1957. It was based on a popular newspaper comic strip character at the time. Fowley and Nelson, drunk as skunks, bashed empty bottles and wastepaper baskets. As the group weren't merely anything more than a collection of Fowley's music-making associates, they didn't have a follow-up, and Fowley and Paxton moved on.
In October of that same year, the two signed a production deal with Bob Keene's Del-Fi Records, recording a follow-up called "Alley Oop Cha Cha Cha," while Paxton drawled out the very same lyrics to the "Alley Oop" hit. It was credited to the Prehistorics.