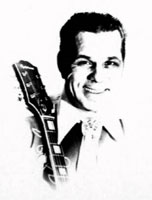 US Country singer born en1929 in New York. Hickory gained his musical interest from his father who was a popular fiddle player in his local area. The interest in the American Indians, which led to his nickname, came from his grandfather, a Cherokee Indian who had relocated from Virginia to New York State in the late 1870s to work in the lumber mills. He subsequently taught the boy about the Cherokee life and its legends. Hickory learned guitar at the age of 13 and began performing at local venues. Between 1949 and 1951, he served in the American Forces, spending much of the time in Germany, where he regularly performed at clubs and on American Forces Network radio. After service, he continued to perform and research further the legends of the Cherokees and wrote many songs based on the facts and historical events that affected the lifestyle of his ancestors. He appeared at festivals in many States and also at major venues with top artists such as Pete Seeger. In 1983, he recorded Land Of My Fathers for the German Cattle label. It contained narrations and songs, which related the way the American Indian has been treated over the years with broken promises, ill treatment and massacres. Hickory eventually retired and apparently settled in Otsego County, New York.