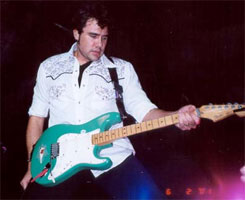 Singer/songwriter Eric Heatherly grew up listening to country, rockabilly, and classic rock artists like Creedence Clearwater Revival, Johnny Cash, Conway Twitty, and Roy Orbison, whose influences shaped his music while he was still a child. Heatherly began writing songs at eight and was performing by the time he reached his early teens, the Chattanooga native played with numerous bands through his high school and college years. After moving to Nashville, Heatherly made himself a fixture of the local music scene, which led to endorsements with Fender and Takamine guitars, as well as a gig in Shania Twain's band for her appearance on the 1997 CMA Awards Show. He recorded his 2000 debut album, Swimming in Champagne, with famed Nashville producer Keith Stegall. While the album spawned a hit single, "Flowers On The Wall", the album was released just as his label, Mercury Records, underwent a regime change while their parent company was in the midst of a merger. Mercury didn't promote Swimming in Champagne into a commercial success, and the label opted not to release his follow-up album. After leaving Mercury, Dreamworks signed Heatherly in 2003, and scheduled the release of his third album, Sometimes It's Just Your Time, for the fall of that year. However, while promotional copies of the disc were sent out to the press, Dreamworks pulled the album from release at the last moment, and it never received commercial distribution. Frustrated with the major label scene, Heatherly struck out on his own, and recorded his next release, 2005's The Lower East Side of Life, for his own Nash Vegas label, with distribution through Koch Nashville.