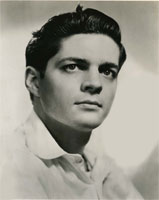 Pop Vocalsist and actor Bill Hayes was born June 5, 1925 in Harvey, Illinois. Following high school, he attended DePauw University, graduating with a double major in music and English in 1947, and that summer he officially began his career as a singer. His big break came when he was a regularly featured singer on comedian Sid Caesar's popular Your Show of Shows television series in the 1950s, appearances that made Hayes a household name. He also appeared in numerous Broadway musicals and plays, including a starring role in a 1953 production of Rodgers & Hammerstein's Me and Juliet. In 1955 he recorded a version of "The Ballad of Davy Crockett," a song written by George Bruns (music) and Thomas W. Blackburn (lyrics) that had been written for and introduced (sung by the Wellingtons) on the Disney television miniseries Davey Crockett on ABC in 1954. Hayes' version of the song was one of three to hit the pop charts in 1955, with renditions by Fess Parker (who played Davy Crockett in the Disney miniseries) and Tennessee Ernie Ford also charting, with Hayes' version hitting the number one spot in March, while Ford's reached number five and Parker's number six on the pop charts. Two months later, a fourth version, this one by bluegrass singer Mac Wiseman, hit number ten, and in all, including all versions, over ten million copies of the song were sold. Hayes had a couple of other minor radio hits in the 1950s, including "The Berry Tree" and covers of "High Noon" and "Wringle, Wrangle," but only the last climbed into the Top 40, hitting number 33 in 1957. Hayes turned increasingly to acting, landing a recurring role as Doug Williams, a convict turned lounge singer, on the long-running television soap opera Days of Our Lives, a role he began in 1970 and held until 2004, when his character was killed off, only to be found later -- in a plot twist -- still alive and living on a tropical island. In January of 2010, Hayes appeared in his 2,000th episode of Days of Our Lives, a testament to his longevity (and that of his character) in show business.