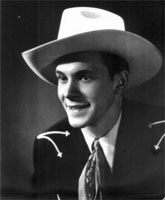 Rudy Hayden appeared on the local country music scene in the late 50’s. In 1957 he wrote and recorded “Want Me A Woman”and “Blue Steel”at Aragon Studios. Then in 1959, he formed Rudy Hayden and the Country Boys. This excellent band was the house band at the Hollywood Bowl in New Westminster from 1959 to 1962. Their band had quite an impressive lineup which included Elmer and Ray Tippe, Jake and Abe Doell, Ed Isaacs and Billy Bouvette. The Bowl was the place to play country music in those days.  As the 60’s progressed, Rudy had to downsize his band and formed Rudy Hayden and the Nuggets with his wife Beverly, Gary Boehlke, Frank O’Çonnell and a drummer named Gary Apted who was the studio drummer on the Elvis Presley soundtrack for Viva Las Vegas. He and Beverly had been married in 1958 and had five kids together, Lita, Randy, Mark Jamie and Ferlin. Rudy appeared on both CTV and CBC television and on stage with such artists are Bobby Bare, Dick Damron and the Family Brown. In 1967 he recorded his album “401 again at Aragon where he also wrote and recorded “Pollution” and “Please Stay Away” in 1972. To top all this off, his magic act with his wife Beverley was one of the best anywhere. He added the magic act to to his country shows and also took the magic act on the road on it’s own. His Fantasy and Feathers show appeared many times on television across the country. He also guested at the Magic Castle in Hollywood in 1952 where he also received the V.M.C. Magic Wand award.  In 1975 he formed the band “Rawhide” with Beverly, Jamie and Jean Lehbauer who was replaced a year later by Tommy Rich. They played many of the local bars performing newer country tunes as well as a Hank Williams Jr. tribute show. In 1987 Beverly had to leave Rawhide due to illness, and Jamie quit the road for a while eventually playing with Derringer. Rudy played as a solo for a while, being rejoined by Jake Doell in 1989 to form a duo.  He moved to Kamloops in 1991 and formed “Dallas” with Ray Tippe and Johnny Lee Barr. In 2000 he sold his home in Kamloops and bought a Motor Home which he fully enjoys by travelling and heading south for the winters.