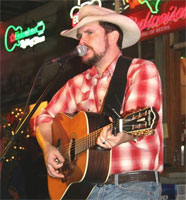 US Country singer born 26 February 1980 in Pleasanton (Texas). Playing guitar and singing, Rodney Hayden made an early impression with his penchant for the sound of traditional country music, even if the material was often newly written. Artists for whom he has expressed admiration include George Jones and especially Hank Williams. Among those with whom he has worked are Robert Earl Keen and Willie Nelson, and he has opened shows for Merle Haggard.
Hayden spent some two years in Nashville, Tennessee, working as a songwriter, but then returned to Texas to pursue his career as a performer. His 2002 debut The Real Thing included the Chip Taylor penned title track and strong original material including ‘Tryin’ To Find Myself’, ‘Back In Your Arms’ and ‘Heartaches And Highways’. The 2003 follow-up Living The Good Life featured another mixture of cover versions and original material, with standouts including ‘Goodbye To My Hometown’ and ‘Son Of A Rolling Stone’. A third collection was released in 2007 on the Palomino label. Among Hayden’s songwriting collaborators are Byron Hill, Keen, Trent Summar and Bill Whitbeck.