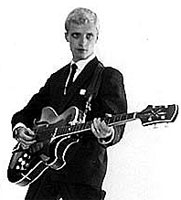 One of the more intriguing footnotes to pre-Beatles rock in Britain, Jet Harris first made his mark as the bassist for the Shadows. As they were megastar Cliff Richard's backing group and the most popular instrumental rock band in Britain, it was a shock when Harris left the group to become a solo act. But with frequent assistance from Shadows drummer Tony Meehan, Harris scored a half-dozen hits in a year and a half. (Meehan himself rates as an interesting footnote to rock history, having turned down the chance to record the Beatles in early 1962 when he was a producer for Decca Records.) Harris' biggest hit, the brooding "Diamonds" (including, it's been said, session guitar work by a very young Jimmy Page), vied for the number one spot with the Beatles' own "Please Please Me" in the U.K. in early 1963. There could have been few better symbols for the changing of the guard in British rock & roll. Harris' recordings typified British rock such as it was in the early '60s: sullen, restrained, disciplined instrumentals (often based on popular themes). Harris' singles were relatively unusual in that they made prominent use of the bass as a lead instrument, and the best of them -- "Diamonds," "The Man With the Golden Arm," and "Man From Nowhere" -- had a menacing, shuddering bass reminiscent of the best James Bond soundtracks. More frequently, however, his instrumentals sounded like a tame Duane Eddy or worse, with cornball adaptations of Western movie riffs. Harris had a couple more big hits after the Beatles broke, but the revolution the group ignited -- as well as a severe automobile accident, along with emotional problems in the wake of his early success -- brought his career to a skidding halt in early 1964. Unbelievably, he turned up in the first lineup of the Jeff Beck Group in February 1967, but never recorded with Beck, who revamped his outfit after a few weeks of rehearsal.