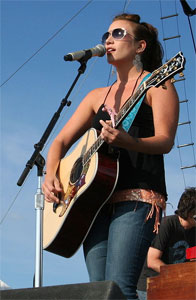 Best known for being one half of the country roots duo the Wreckers with friend Michelle Branch, Jessica Harp put music at the center of things from a very early age. Born on February 3, 1982 in Kansas City, MO, Harp was already singing by the age of three, writing song lyrics by the age of eight, and playing guitar by the time she was 13. Music was inclusive for Harp, and in 2002 she released an independent solo album called Preface, which unfortunately didn't make much of a stir. While working as a singer and songwriter in Nashville, Harp began singing backup for Branch, and when Branch opted to take a break from her solo career in 2004, joined her in the duo the Wreckers. Harp's country edge meshed nicely with Branch's pop approach, and the Wreckers were a success from day one. A debut album, Stand Still, Look Pretty, appeared in 2006 from Maverick Records, followed by a live set, Way Back Home: Live from New York City, a year later in 2007. That same year, Harp and Branch announced that they were putting the Wreckers on hold and concentrating on solo projects. Harp married Jason Mowery, the Wreckers' fiddle player, in 2008. Her solo project, A Woman Needs, produced by Jerry Flowers and featuring Vince Gill and Keith Urban in guest spots, appeared in 2009 from Warner Bros. Nashville.