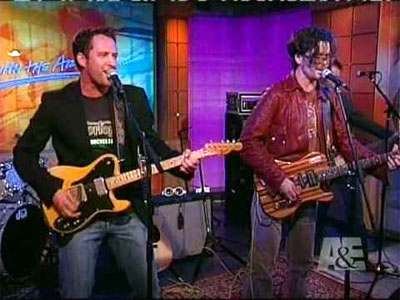 Hanna-McEuen is the duo of first cousins Jaime Hanna and Jonathan McEuen, the sons of identical twin mothers married to Nitty Gritty Dirt Band founding members Jeff Hanna and John McEuen. The two played and sang music together as children, and both went into the music business. Hanna moved to Nashville after graduating from high school and became a backup musician and co-songwriter with the Mavericks. McEuen led bands and played frequently at bluegrass festivals with his father. The two first attracted attention as a duo when they were invited by their fathers to sing lead on "Lowlands," a track of the Nitty Gritty Dirt Band's album Will the Circle Be Unbroken, Vol. 3. It became a focus track on the album, with a video, and led to appearances on The Tonight Show with Jay Leno and the Grand Ole Opry with the Nitty Gritty Dirt Band. Country record companies took notice, and Hanna-McEuen signed to MCA Nashville for their first, self-titled album.