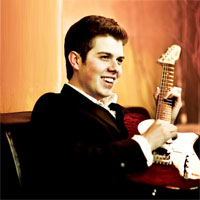 Guitarist/singer Ben Hall plays in a fingerpicking or thumbstyle of country music that brings to mind the icons of the genre. A native of Okolona, Mississippi, Hall first began playing guitar at age six and quickly began to mimic the recordings of the classic country artists his parents exposed him to, including Merle Travis, Chet Atkins, and the Louvin Brothers. At age 13, Hall took second place in the 2002 National Thumbpicking Contest in Mountain View, Arkansas -- an accolade he would achieve several times over. In 2005, he won national and international thumbstyle guitar contests and received the Horizon Award from the National Thumbpicker’s Hall of Fame. Hall's proficient technique and tradition-steeped style of playing caught the ear of the wider country community including an elderly Charlie Louvin, with whom Hall developed a friendship and later toured before Louvin's passing in 2011. Hall has also performed with an array of artists including Candi Staton, Kurt Wagner, Jeannie Seeley, and others. He released his self-titled debut solo album on Tompkins Square in 2011.