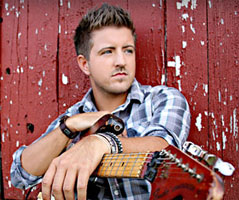 Only 11 years old when he notched his first hit single, Billy Gilman was the youngest performer ever to reach the Billboard country charts, breaking a record held by Brenda Lee since 1957. Gilman was born in Westerly, RI, on May 24, 1988, and grew up in nearby Hope Valley. He was singing before he started school and developed rapidly enough to start performing publicly at age seven. He was booked as an opening act at several county fairs, including one with headliner Jo Dee Messina. Gilman caught his big break when Asleep at the Wheel leader Ray Benson heard him sing and was impressed by the precocious power behind his Vocals. Benson had Gilman make a demo tape, which wound up landing the young singer a deal with Epic.
Backed by seasoned Nashville studio pros, Gilman completed his debut album, One Voice, in 2000. Its title song, a spiritual plea against school violence, climbed into the Top 20 of the country charts, and the album itself hit number two and quickly went gold. The follow-up single, "Oklahoma," was also a Top 40 hit, and the holiday album Classic Christmas was rushed out by the end of 2000; it reached number four on the country charts, and featured a duet with fellow Vocals prodigy Charlotte Church. Gilman's proper second album, Dare to Dream, appeared in 2001 and hit number six; it also spawned two minor chart hits in "She's My Girl" and "Elisabeth," the latter a sentimental ballad about a girl battling a terminal illness. That theme became the basis for Gilman's third album when he met young poet and best-selling author Mattie Stepanek -- a muscular dystrophy sufferer -- during a TV appearance with Larry King. Gilman decided to record Stepanek's poems in song form, and several Nashville pros were commissioned to set them to music. The result, Music Through Heartsongs: Songs Based on the Poems of Mattie T.J. Stepanek, was released in spring 2003. Everything and More followed in 2005 and the eponymous Billy Gilman in 2006.