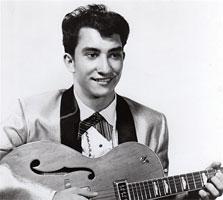 Session performer, bassist, and guitarist Johnny Fortune has been in the music business a long time. In the early years, he did session work for big names like Sam Cooke, Barbara George, Glen Campbell, and he even toured with the Beach Boys.
In 1963, when Fortune was only 16, he recorded Soul Surfer under the Park Avenue Records label. The album held popular surf tracks like "Sunset" and "Surf Rider." Sax player Jim O'Keith and ten-year-old drummer Joey Sudetta both lent their talents to the album. Soul Surfer received good reviews and earned Fortune a marvelous invitation from Johnny Burnette to tour through England. Unfortunately, because of his young age, Fortune was not able to go.
Switching over to country music, Fortune was nominated for a Nashville Music Trailblazer award in 1997. Working under the Media Records label, he recorded Life Goes On. The album, with tracks like "What Do You Think About That," "I Got a Woman," and "She Just Don't Care," was released in 1999.