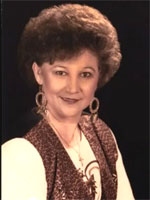 Peggy Forman was a well-known Nashville songwriter. The daughter of an oilfield worker and a homemaker, she hailed from Centerville, Louisiana. A music lover and singer since childhood, young Peggy met her husband Wayne Forman while still in high school. After their marriage, they began performing together in a band with Wayne singing leads and playing guitar and Peggy on harmonies. Later, she became the lead singer. At the time, she was also writing songs, and one of them was recorded by Joe Lewis. Not long after, her "Out of My Head and Back in My Bed" became a chart topping hit for Loretta Lynn. In 1978, Conway Twitty, an early supporter, recorded her "Yours to Hurt Tomorrow," and helped Forman sign a recording contract with MCA in the mid-'70s. He and Snuffy Miller then became the producers of her debut single "The Danger Zone," which became a minor hit. She recorded several other singles, but they never made it to the charts. Around 1980, she signed to Dimension Records and had a small string of hits beginning with "There Ain't Nothing like a Rainy Night" and ending in 1982 with "That's What Your Lovin' Does to Me." Forman has had considerably more success as a writer; many prominent artists such as Bill Anderson, Jean Shepard and George Strait recorded her songs.