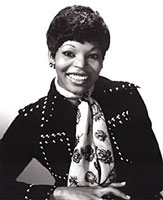 Born January 16, 1946, Jackson, Tennessee, USA, died 15 June 1986. One of the few black female singers to achieve success in country music. After relocating to Milwaukee, she sang with local country bands until 1974, when, no doubt encouraged by the success gained by Charley Pride and Stoney Edwards, she decided to move to Nashville. She toured with Justin Tubb and also impressed through her performances in Las Vegas. She recorded for the 50 States label and in 1975, she gained her first minor Billboard chart successes with ‘Sweet Country Music’ and ‘He Loves Me All To Pieces’. Between 1976 and 1979, she had seven more minor hits, which included her biggest, ‘You’ve Got To Mend This Heartache’ (a number 40 in 1977), and her version of the Fats Domino pop hit ‘Three Nights A Week’. Although she had no chart success after 1979, she remained a popular performer until her sudden death, following a brain haemorrhage, in the Vanderbilt Hospital, Nashville, on 15 June 1986.