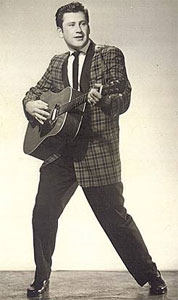 Although never experiencing real commercial success, Rusty Evans enjoyed one of the most eclectic and long-lived careers in the annals of rock and roll cultdom, evolving from rockabilly to folk to psychedelia and all the way back again. Born Marcus Uzilevsky in Brooklyn, he later attended New York's School of Art and Design; in 1958 Evans made his recorded debut, releasing the rockabilly efforts "I Lived, I Loved, I Lost" and "Midnight Special" on Brunswick. A year later, he resurfaced on HIP with "Talkin' from Your Heart." By 1962 Evans was a staple of the Greenwich Village folk circuit, sharing stages with Bob Dylan, David Crosby and Fred Neil; in 1964, he recorded his first LP, Songs of Our Land, followed later that year by Railroad Songs. After one more stab at folk success with 1965's Live at Gerde's Folk City, Evans discovered the nascent psychedelic scene during a brief stop in Los Angeles, where he also recorded the 1965 Musicor single "1983"; upon returning east, he landed in Philadelphia and formed his own psych band, the Deep, with Mark Barkan, David Bromberg and others. Signing to Cameo-Parkway, over just two days in August 1966 the Deep recorded their lone official album Psychedelic Moods of the Deep, one of the more rare and fascinating byproducts of its time; virtually the same lineup later reunited as Freak Scene, releasing 1967's Psychedelic Psoul on CBS. (A series of related CDs culled from the sessions in questions later appeared on Collectables). With songwriter and producer Teddy Randazzo, Evans then co-founded Eastern Productions, signing the bands Third Bardo and the Facts of Life—for the former, Evans and Victoria Pike authored the psych cult classic "I'm Five Years Ahead of My Time." In 1967 he moved to Los Angeles, working as a staff producer for the Take Six label and helming sessions including the Nervous Breakdown's "I Dig Your Mind." After a stint working with producer Matthew Katz, in 1969 Evans reclaimed his birth name to release a self-titled LP on Kinetic as simply Marcus—a minor classic of richly orchestrated psych-folk, like much of his work it is a fascinating relic of a particular time and place, in this case San Francisco's Haight-Ashbury district in the post-Summer of Love era. Evans then dropped out of sight for about a decade, returning to his folk roots for his 1979 comeback effort Life's Railway to Heaven; in 1988 the Arlington Symphony Orchestra performed his Folk Symphony for Sara, and at the dawn of the new decade he later adopted yet another alias, Uzca, to explore world music and ambient on the LPs Slice of Light and Gypsy Dreams. In 2000 Evans truly traveled full-circle, forming the rockabilly combo Ring of Fire with son Danny and releasing a self-titled tribute to Johnny Cash. Under his birth name, he's also enjoyed a measure of fame for his landscape art.