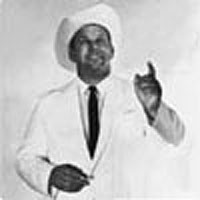 Born in Virginia on July 22, of 1922, Brother Claude Ely is cited by many as being one of the true examples of gospel music in its purest form as an influence on rock and roll. Though probably not a major influence on rock himself, Ely's music features the heavy rhythmic emphasis and impassioned gospel shouting that was indicative of the southern Pentecostal churches that have been seen as the birthplace of many rock forms. Ely himself was a near legendary Holiness preacher who crisscrossed the United States holding revivals and tent meetings, playing his own brand of explosive traditional songs and originals. No doubt, the sheer volume of his sound is impressive, given that it was mostly comprised of his voice and a forcefully strummed acoustic guitar. Said to have contracted TB as a boy, Ely claimed a miraculous healing that inspired him onward to become a gospel musician. The majority of Ely's recorded work was done for the King label, with him making his first records in 1953. Many of Ely's recordings were taken straight from live Pentecostal church services, though he also recorded in a more standard country gospel style in the early 60's. In a legendary account, Ely is known to have died of a heart attack in 1977 while playing the organ during a sermon. He is said to be widely remembered in the areas in which he ministered to this day.