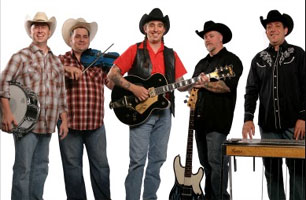 From such legendary lone star groups as Bob Wills & the Texas Playboys, Willie Nelson & the Family, and Asleep at the Wheel to even that little band from La Grange, ZZ Top, Texas has been a breeding ground for some of country music’s most acclaimed bands over the past half century. Each group has taken a Texas musical formula, made it their own, and played to millions across the world.
So in a land where country music & Bob Wills will always be king, a little country band from the Big D, seasoned over the last ten years, has arisen and proven themselves as one of the most influential artists in a state far from short on talent.
Effortlessly infusing their straight-from-the-Texas-honky-tonk brand of country music with their take-no-shit, up yours-to-music-row outlook, the band has thrilled crowds all over with their renegade style of country music that is just as popular in tattooed punk rock & hipster circles as it with the Texas baby boomers, outlaw bikers, and college crowds.
Cut from the same cloth as Dallas legends Reverend Horton Heat, rockabilly king Ronnie Dawson, & Texas blues icons, the Brothers Vaughan, lead singer / lead guitarist Matt Hillyer has logged almost two decades touring the nation’s rock clubs & punk festivals, while back home in Texas headlining a Friday night at such legendary honky-tonk’s as the world’s largest, Billy Bob’s Texas in the Fort Worth Stockyards.
With an early passion & guitar picking ability drawn to Texas rockabilly, it was fronting the popular 90’s punk/ rockabilly outfit Lone Star Trio that Matt met fellow Trio bassist Steve Berg, a friendship & duo that has spanned over 15 years, 10 albums, and eventually led to their forming of Eleven Hundred Springs in 1998.
As the partnership between front-man Hillyer and bassist Steve Berg has evolved over the band’s ten-year career, the two have been joined by platinum rock drummer Mark Reznicek (of 90’s post-grunge outfit the Toadies ) , 3rd generation Texas fiddler Jordan W. Hendrix, and Texas pedal steel gunslinger Danny Crelin, creating a style of country music that has their Texas contemporaries in awe, hometown fans buzzing and has found them at the forefront of a new generation of alt-country insurgents.
With 2008 marking the band’s ten year anniversary, the members of Eleven Hundred Springs are making the best music of their career. 2008 will also bring about the release of their highly anticipated new album, “Eleven Hundred Springs’ Country Jam”.
The 12 track disc produced by 2003 Grammy winner Lloyd Maines ( Uncle Tupelo, Robert Earl Keen, Wilco ) will include 9 new songs penned & arranged by lead singer Matt Hillyer & features special guest appearances by Nick Curran of the Austin-based punk rock group Deguello, as well as California’s reigning queen of country music, Heather Myles.
EHS’s last album, 2004’s “Bandwagon”, was their first UMG distributed release for upstart indie Palo Duro Records. Engineered & co-produced with 2005 Grammy winner Stuart Sikes ( Loretta Lynn, White Stripes ), the album went straight to 1 on XM & Americana charts and featured some of the year’s most played songs on Texas country radio, as tracked by Best in Texas magazine.
The band toured over 170 days a year in 2007, playing shows to thousands of people across the Lone Star State and opening for such Texas giants as Willie Nelson, ZZ Top, & fellow friend and Fort Worth neighbor Pat Green. With their live show acclaimed by fans on the internet & media alike as one of the best in Texas and the band continuing to pack honkytonks across the nation, all one needs to ask is: Are you sure Hank done it this way?